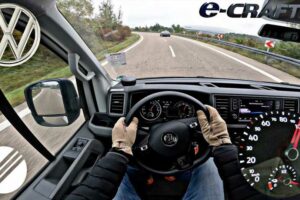 Volkswagen nas been offering its Crafter commercial vehicle as the fully-electric e-Crafter since 2018, a model with not the best specs, but it might still be a good fit for some urban businesses. The e-Crafter only has a 35.8 kWh battery pack and its WLTP range is a lowly 160 km (99 miles).

Power is not impressive either, as the e-Crafter is motivated by a single front-mounted 100 kW (136 horsepower) electric motor that can push it up to a limited top speed of 90 km/h (56 mph). So with numbers like these, you wouldn’t expect it to be particularly impressive.

And it isn’t, as demonstrated in this POV video uploaded by the TopSpeedGermany YouTube channel. The van is driven up to the highway, and at least at lower speeds it does show it has decent in-gear acceleration, thanks to its peak torque output of 290 Nm, comparable to that of a 2-liter diesel.

However, when the driver takes the vehicle up to the autobahn and drives it at its top speed, the analog state of charge gauge shows current is being extracted out of the battery very quickly. The vehicle appears to be fully charged at the start of the video and it shows a range of 128 km (80 miles) and after the 8-minute drive, that has already dropped to under 110 km (68 miles).

The van can be DC fast-charged at up to 40 kW and that will bring the state of charge from dead to 80 percent in around 40 minutes. This relatively low charging time, coupled with the cavernous 10.7 cubic-meter (378 cubic-foot) cargo area that is exactly the same as on the ICE version of the Crafter.