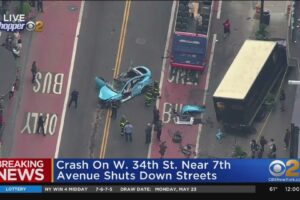 According to multiple reports, a Tesla was involved in a violent accident in Manhattan this week that also involved a double-decker tour bus. Several vehicles were involved in the incident, including a UPS truck that was pushed onto the sidewalk area in front of an Old Navy store.

As you can see from the video above, which includes chopper footage, there appears to be a pretty significant mess in Herald Square in midtown Manhattan. The crash occurred at 34th Street and Seventh Avenue, with the first reports coming in at around 11:30 AM on Tuesday, May 24, 2022.

UPS is also apprised of the situation and working to cooperate with investigators. However, Top View, the company that’s assumed to be responsible for the tour bus, didn’t respond to a request for comment. In fact, NBC New York reported that the company’s phone lines are disconnected.

At this point, not much is known about the crash or any related injuries. The New York City Fire Department told reporters that it arrived at the scene after reports of a potential “trauma patient.” Another individual was reportedly transported to the hospital.

Footage and images of the scene show that the Tesla is missing much of its roof. However, the media didn’t make it clear whether it was torn off during the collision or removed by first responders to access the driver. The same is true of the driver’s side door.

The following video was posted on Reddit, and it gives us a very good look at how the incident unfolded:

This is a developing story. As the media and the authorities provide more information, we’ll either update this article or publish a new one. In the meantime, let us know your take on what you see in the videos above.