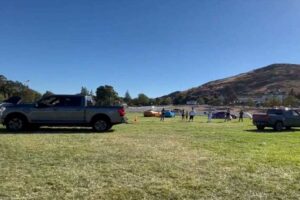 The Ford F-150 Lightning and Rivian R1T have been recently tested against each other in a tug of war.

The two models are not direct competitors, but since they are among the first modern all-electric pickups on the market, tests of all kinds (range, acceleration, towing and more) are inevitable.

In the video shared by Tesla Raj, we can see the Ford F-150 Lightning Lariat and Rivian R1T. The F-150 is a full-size pickup, while the R1T is slightly smaller (between the mid-size and full-size categories). Nonetheless, the R1T is a bit heavier.

We guess that other factors, including differences in power output, are pretty much meaningless on the grass. Better traction is the key here.

According to the video, the Rivian R1T easily won the first run when both started at the same time, as well as the second one, when the Ford F-150 Lightning was moving forward at the beginning.

It’s not the most scientific competition, but always interesting. Probably over the coming years, we will see many more videos comparing EVs with internal combustion engine counterparts, as well as various EV models.

The favorite for the tug of war is probably the GMC Hummer EV Pickup and potentially the upcoming Tesla Cybertruck.

In general, electric pickups are expected to be noticeably better at tug of war than conventional trucks of similar size/type, partially because of its weight and much more precise and powerful electric drive.