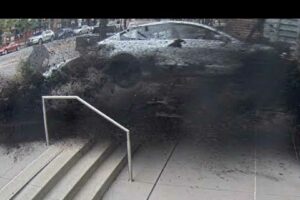 According to a host of news reports, a driver of a Tesla Model S crashed into the Greater Columbus Convention Center last week. The driver told the police at the scene that “the vehicle lost control of its brakes.” However, reports from the Columbus police show that the driver has been cited for failure to control the vehicle.

The driver says that on On May 4, 2022, at around 12:30 PM, he was driving his Tesla Model S on SR-315 when he lost control of his brakes while traveling some 70 mph. He then proceeded through a red light and ran into the convention center. The 2020 Model S belongs to Columbus Green Cabs Inc.

Several witnesses at the scene substantiated at least some of the driver’s claims. They explained to the police that the Tesla seemed to accelerate in order to beat a yellow light. However, it ended up running a red light and it didn’t appear to slow down at all before getting some pretty crazy air and crashing directly into the building.

The Model S drove right through a large planter before launching off the steps and entering the building while it was several feet off the ground. Upon entering the building, the car did almost a complete turn and came to a stop facing the front of the convention center.

As you can see in the video, there’s not only footage from the outside of the convention center, but you also get to see an overhead shot from inside the building as the Model S makes its grand entrance.

According to a spokesperson, the Tesla crash caused some $250,000 to $350,000 in damage to the inside and outside of the convention center. Not only will internal and external structures need to be replaced, but also power lines, the sprinkler system, and various items and decor.

Fortunately, no one was hurt in the incident. In fact, several news reports confirm that while the driver was taken to the hospital to be checked out, he was conscious and able to walk away from the car after the crash.