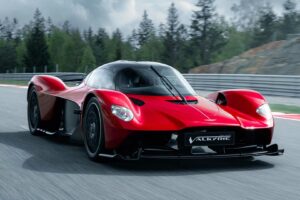 The first few customer examples of the Aston Martin Valkyrie have already hit the road – and for many, the track as well. We’ve seen the Valkyrie wailing its V12 around Goodwood in the UK, attacking Mugello in Italy, and even having a run-in with the wall at Silverstone. Whoops.

But one of our favorite customer cars so far is the gorgeous Supernova Red Valkyrie pictured here. It’s the one and will be the only Valkyrie in Norway, and while we’ve already seen it sitting pretty in the showroom, this past week, it finally hit the track for the first time.

Chassis number 69 of 150 took its talents to Rudskogen Motorsenter, which sits just an hour outside of Oslo, for a day filled with great sounds and stunning visuals. The owner – @valkyrie.supersixtynova on Instagram – was nice enough to share this highly produced video (embedded above) and a few photos of the car in action.

Customers interested in an even more extreme example of the Valkyrie can splurge on the AMR Pro model. This track-only example sheds its hybrid setup and drops the total output from 1,160 hp to 1,000 (735 kW) in the name of lightness. Only 40 versions of the Valkyrie AMR Pro will make their way to customers worldwide.