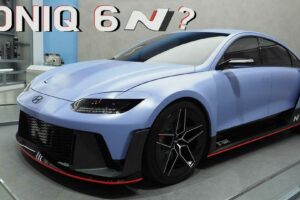 Hyundai made the new RN22e concept look, sound and feel very exciting in its presentation videos, leaving us to wonder what its intentions are exactly. Will it just eventually put something very similar to the concept into production as the Ioniq 6 N,  or will the latter be considerably toned down compared to the study that the automaker says is really a rolling laboratory, so it’s fully functional, not just a show car.

The Korean automaker revealed the RN22e study pretty much at the same time as it pulled the wraps off the production Ioniq 6. Looking at the two side by side, it’s pretty clear the RN22e is base on the Ioniq 6, although it has a very tasty looking widebody kit and additional aero – it’s basically been given a racing car makeover and the same powertrain that’s going to move the Kia EV6 GT.

That means it packs 577 horsepower thanks to a dual-motor all-wheel drive system that will enable it to sprint to sixty in around 3 seconds. Hyundai also notes in all its press blurbs for the RN22e that fun and driver engagement were top priorities for the project, and they’ve really managed to capture that in their presentation videos for the concept – they’re even proud of the artificially generated sound the vehicle makes, stating that it too adds to the excitement of being behind the wheel.

If so far you’ve only seen the RN22e in the official photos and videos, you can check it out in this live walkaround video uploaded by CarSceneKorea. It definitely looks like an interesting vehicle with lots of track-focused details to take in, and far more aggressive in person than the extremely tapered standard Ioniq 6.

Yet the question remains: will the production Ioniq 6 N retain the striking widebody of the RN22e? Well, if we look at what German manufacturers (which Hyundai has been increasingly inspired by over the last two decades) do with their top performance offerings, which is what the Ioniq 6 N is going to be for Hyundai, then yes, we say the manufacturer will give the sportiest Ioniq 6 a wider stance, both for looks and in order to allow it to give the vehicle a wider track and thus better stability and cornering ability.

However, if we look at the Kia EV6 GT, which basically just gets slightly different bumpers and wheels compared to lesser models, but no other body modifications, then no, we don’t think the Ioniq 6 N will get the widebody. Further strengthening this point is the fact that we’ve already seen the Ioniq 5 N under light camouflage and it appears to have the exact same body as the standard Ioniq 5, so it doesn’t get wider fenders.

Thei Ioniq 6 N will be a halo car for the company though, so it may be given special treatment. Maybe the base N model won’t get the widebody but Hyundai could offer a special limited series model that might offer this, or it could even offer a track-only variant that could be very close to the RN22e.