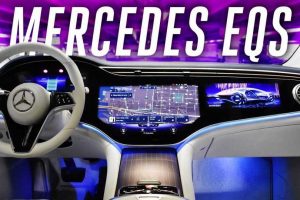 Is the EQS more than just an electric equivalent of the S-Class?

Mercedes-Benz is about to pull the wraps off what has to be one of the year’s most important electric car reveals. The EQS will be the German automaker’s flagship electric sedan, a BEV equivalent to the internal combustion-engined S-Class, but based on what we’ve seen in this video, it’s shaping up to be more than that.

We really wonder if the EQS will become more desirable than the more traditional S-Class. With the complete absence of any engine noise in the cabin, it theoretically offers a more luxurious than its gas-burning S-Class brother – which I recently had a chance to drive in S500 guise and the six-cylinder engine in that is definitely a bit louder than you might expect.

It’s still a pleasant six-pot thrum in the S-Class, but you can’t make it go away, and it does take away from the serenity of the driving experience. In the EQS, though, you can drive without sound, or you can enable the augmented sound when you want to (although we suspect most will just enjoy the silence).

Does the EQS have what it takes to shake up the electric luxury sedan segment? Well, if the EQS won’t do it, after Mercedes invested so much into its EQ program (this being its top of the range offering), then we don’t know what vehicle will. And since it won’t be that much more expensive than the Tesla Model S, its default main rival right off the bat, it has a strong chance of doing that. This is an exciting model reveal and we can’t wait to learn more about it.

Until we get a chance to drive the fully uncovered car with all details revealed, you can check out this slew of videos shot by various American automotive outlets. You can also watch our own Kyle Conner who was among those invited to experience the EQS.