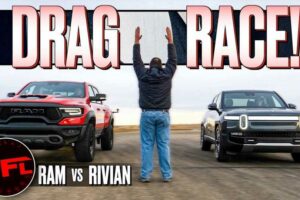 Here is most likely the first Rivian R1T drag race against another pickup – not an accidental one, but the quickest stock pickup truck on the market: Ram TRX.

A huge disproportion in size catches the eye, but don’t be fooled, the Rivian R1T is a real contender and even weighs more than the Ram (close to 7,000 lbs vs over 6,000 lbs).

As one would guess, the Rivian R1T has significantly outperformed the Ram TRX, which means that the new king of quickness has been born among the pickups.

The Rivian R1T was at 90% state-of-charge (SOC) in Sport mode and the lowest suspension setting. One run drew only a little bit of energy, so the SOC lowered to 89%.

In the second part (9:10), we can also see a drag race between the Rivian R1T and a Tesla Model Y Performance.

The top-of-the-line Model Y should be good for 0-60 mph in 3.5 seconds, although it was on snow tires.

Anyway, after a close race, the Rivian R1T won against Model Y Performance, which was quite amazing. This time, the track happened to be too short for the test and the R1T ended somewhere in the grass when braking.

Additional content, with behind the scenes, is available on the all-new TFLEV channel: