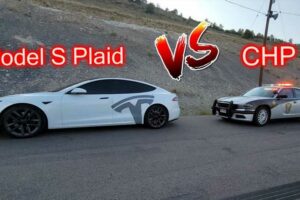 Fortunately, this was all done in good fun, on a track.

Leave it to Erik Strait (DAErik) to provide the first video of a Tesla Model S Plaid outrunning a police car. But wait, he would never actually do that on a public road, and you shouldn’t either. Instead, the race took place on a track, but it’s arguably interesting nonetheless.

It looks like police departments will have no choice but to invest in a future of electric patrol cars, or they’ll be left behind in more ways than one. As more people make the switch to EVs, traditional gas-powered police cars will be at a notable disadvantage.

Sure, gas-powered police cars may have more range than electric cars, and in some cases, better endurance. They can also gas up quickly, and there are gas stations everywhere. However, as electric vehicles improve, they’ll likely prove better performers than gas cars in virtually every metric, and the Model S is arguably the king of the mountain, at least for now.

If you know anything about the Model S Plaid, you probably already know exactly how this race is going to play out. The Plaid is the quickest production car ever built. And, while police cars are quick, they don’t stand a chance against instant all-electric torque and otherworldly acceleration.

With that said, knowing what’s going to happen, and actually watching it happen are two very different things. To say that the Plaid simply outruns the police car is a severe understatement. You’ll have a much better understanding after you see it with your own eyes, but we can honestly say that the footage is unreal. It’s as if the police cruiser isn’t even involved in the race.

As the Plaid launches, the police car is no longer even on the screen, and you don’t actually see it creep into the frame again until the Tesla has completed the full quarter-mile run. It’s insane. There really are no words for it.