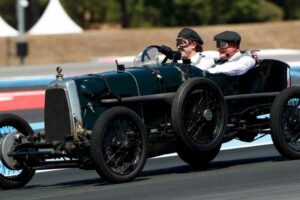 Sebastian Vettel is German through and through, but by playing the motorsport game for decades, he fully understands and values the contribution British racing has had to Formula 1 and to racing in general. He had the opportunity to get behind the wheel of the very first Aston Martin Grand Pix car, dubbed TT1, and drive it around the Paul Ricard track in the build-up to this weekend’s F1 French Grand Prix.

Although this was a publicity stunt to mark the race car’s 100th anniversary, the four-time F1 champion seemed to be genuinely enjoying the “hot lap” driving the “Green Pea.” The Aston Martin Aramco Cognizant Formula One Team driver got to experience the mighty 55 horsepower of the 1.5-liter engine in a voiturette-styled racer weighing just 750 kilograms (1,653 pounds). The TT1 is actually 45 kg (99 lbs) lighter than this season’s AMR22 F1 car.

Back in the early days of racing, these Grand Prix machines had two seats, one for the driver and the other for a mechanic. The latter’s job was to pressurize the fuel tank by using a hand pump and fix any problems that might’ve occurred during the race. While it may have been more practical than a current F1 car, let’s just say it was a wee bit slower since it topped out at only 85 mph (137 km/h).

The Aston Martin TT1 was originally supposed to race for the first time at the 1922 Isle of Man TT but its motorsport debut was pushed back until the French Grand Prix on July 15. Wealthy young motor racing driver and pioneer Count Louis Zborowski drove the Green Pea, after investing £10,000 in the development of a new 16-valve, twin-overhead cam four-cylinder engine.

It was the engine that forced Louis Zborowski to retire the car after 19 laps, with Felice Nazzaro driving the Fiat 804 taking the win. The 1922 French Grand Prix podium was completed by Pierre de Vizcaya in second place and Pierre Marco in third, with both driving the Bugatti T30. The other Aston Martin, the TT2 driven by Clive Gallop, also retired from the race because of an engine problem.