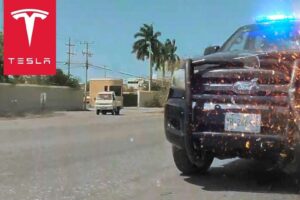 Tesla crashes sure seem to get plenty of attention online, but this one is quite a bit different from most that we’ve seen and shared. This is because the Tesla driver is just proceeding in traffic as a police truck hits it in the rear.

At any rate, that traffic starts to slow ahead, and the Model S Plaid driver doesn’t really have anywhere to go. Thankfully, the Tesla driver is able to slow down with more than enough distance between it and the car ahead. However, that’s not the case with the police pickup, which slams into the back of the high-performance electric car.

The Tesla driver suggests that perhaps the officer was glancing back at his blind spot hoping to move to the right and overtake the cars on the left, which could explain why the officer hit the Tesla without even appearing to brake.

The Model S Plaid driver, Hugo, waited months to get the expensive Tesla, and he had only been driving it for a few months. In fact, he’d only had his license briefly. Hugo is just 16 years old, and a new driver. We have no idea how he ended up with Tesla’s priciest model, but that’s beside the point.

Fortunately, according to the video, the police officer immediately took responsibility for the rear-end crash, and no one was hurt. However, after filing an insurance claim, Hugo is still waiting to learn how long it will take for the repairs, and how much they’ll cost.

This is yet another incident that emphasizes the worth of Tesla’s free built-in dashcam (TeslaCam) and Sentry Mode camera-based security system. The footage proves that Hugo wasn’t at fault, and it can help the authorities and insurance companies sort out important details related to the incident.

Check out the video for other interesting TeslaCam stories. Then, share your takeaways in the comment section below.