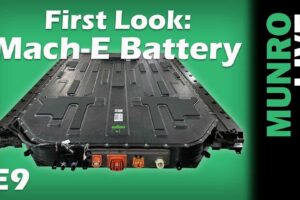 In the latest episode about the Ford Mustang Mach-E teardown with Munro Live, Sandy Munro and Ben Lindamood present the removal of the battery pack.

In the video, we can see how the pack is mounted to the car and how it looks. Munro Live disassembles a dual-motor, all-wheel-drive version of the car with the Standard Range battery (68 kWh usable / 75.7 kWh total).

The total weight of this pack stands at 485 kg, but according to the review, the weight is increased because the battery box is strengthened (especially on the sides) and becomes a structural part of the vehicle. The top cover of the box is made of composites to save weight. The overall result is 156 Wh/kg on the pack level.

In the front, there are four electric connectors (to the DC fast charging port, to the front inverter, to the onboard charger, and a low voltage connector), while in the rear we can see only one to the rear inverter.

There are also four cooling lines in front – two for the battery, and two that run through to the rear-drive unit.

Munro Live appears to like the overall engineering of the battery, however, he notes that welds are not necessarily consistent on one side of the tray, which is a bit of mystery.

Hopefully, soon we will see more EV-related stuff, including modules and cells. Batteries for the Ford Mustang Mach-E are supplied by LG Chem’s LG Energy Solution.

The final part of the episode is a comparison of battery weight, capacity and ranges (EPA Combined) for several electric cars, including Tesla Model 3, Tesla Model Y, Chevrolet Bolt EV, Jaguar I-PACE, Audi e-tron, BMW i3 and of course the Ford Mustang Mach-E.

However, we would not focus on it, as the pack capacity appears to be inconsistent in terms of net/total (Audi is total, Ford is net for example) and it would be better to use EPA Highway ranges/other tests, like our 70 mph range test, to get a better overview.