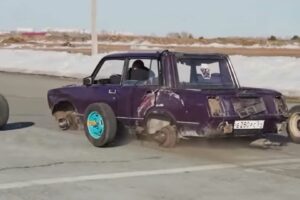 A car losing one tire while driving down the road is dangerous enough, but what happens if a car loses all four at once? We now know thanks to a new Garage 54 YouTube video that blows all four tires off a tired-looking Lada for, uh, science, the science of fun.

The crew at Garage 54 designed special, pressurized wheel hubs that use a vacuum to attach themselves to the car. Hoses are attached to each hub that connects to an air canister to counter the vacuum. Release the valve, and pressurized air enters the hubs, popping them off the car.

The vacuum pressure is enough to hold the rims to the car, but turning is a challenge. It loses a tire on two occasions while trying to turn around. Thankfully, agility isn’t needed for this experiment. To start, the crew begins by blowing the front tires off, which fly off from the car as designed, but they continue to roll down the track. The car remains steerable as the front grinds into the ground, slowly bringing the Lada to a stop.

It’s unlikely your car would ever lose more than one tire at a time while driving, but blowouts and other tire failures do occur, sending cars careening down the road, often with the driver unable to control the vehicle. And it’s not like you can prepare for it to happen either, even if the guys at Garage 54 try to practice again and again for laughs. Tires matter, and ensuring they are properly inflated with adequate tread, and no defects can save your car and your life. No one wants their car’s undercarriage to become in importune brake.