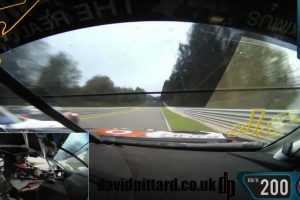 As proven by the soggy and delayed 2020 running of the 24 Hours of Nurburgring a few weeks ago, multi-class races on the Nordschleife involves some spectacular overtakes. This video from David Pittard – who wrote a great piece explaining how to become a pro racer for Car Throttle many moons ago – shows just how many cars someone in a top-class car might pass in one sitting at such an event.

Shot at an NLS (formerly known as VLN) race on the 15.2-mile GP circuit/Nordschleife combined circuit earlier this year, it involves a qualifying lap in a BMW M6 GT3. Pittard was told over the team radio: “There is rain on the way David, put in a qualifying lap before it comes”. Naturally, the hammer came down, but the only trouble was, other teams had the same idea, meaning much of the 150-car grid was out on track.

During the lap that followed, Pittard overtook 54 cars while skillfully negotiating slower traffic and also nipping past a few GT3 machines. There are some sphincter-compacting moments, including one at around the 02:20 mark when two competitors are overtaken with the M6 running two wheels on the grass. Despite all the traffic, the lap was good enough to snatch fifth on the grid.