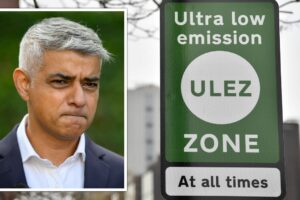 The expanded Ultra Low Emission Zone would cover nearly the entirety of the capital city, with 3.5million more people at risk of being charged daily for driving. London Mayor Sadiq Khan is proposing to extend the scheme’s boundary from the North and South Circular Roads to the whole of Greater London from August 29 next year.

If the proposals were to be introduced, Transport for London would bring in an extra £1.7million per day.

It is estimated this would impact an additional 135,000 vehicles.

Drivers with non-compliant vehicles face daily charges of at least £12.50 to drive into the existing ULEZ boundary.

For diesel cars to avoid the charge they must generally have been registered after September 2015, while most petrol models registered from 2005 are exempt.

Mr Khan has previously ruled out the possibility of introducing a Clean Air Charge, as well as a tariff to charge vehicles registered outside of London to enter the city.

Many have criticised the Mayor’s “war on motorists”, with green schemes launched in London being slammed by drivers in recent years, including Low Traffic Neighbourhoods.

In a tweet, Sadiq Khan outlined why the consultation was being launched and why drivers in the city should fill out the survey.

He said: “Breathing clean, safe air should not be a postcode lottery.

“Londoners in outer boroughs deserve the same, which is why I’m launching this important consultation.

“I’m not willing to stand by and wait when there is more we can do in outer London that could make a difference.

“We will be doers, not delayers, not only to protect Londoners’ health right now, but for the sake of future generations to come.”

He also called on all Londoners to take part in the consultation to expand the ULEZ to cover almost the whole of the city.

The plans have been criticised by politicians in the House of Commons, in addition to drivers.

Responding to Mr Blackman, Transport Minister Andrew Stephenson said Sadiq Khan must not hit drivers at a time when costs were already so high.

He added: “Decisions on road charging are of course for the Mayor of London alone to take, but I agree… the mayor must not punish people who need to use their cars, especially at a time when people are struggling with the cost of living.”

The survey points to the “triple challenge” that London faces through toxic air pollution, the climate emergency and traffic congestion.

As part of TfL and Sadiq Khan’s vision for London, it is hoped that 80 percent of all trips in London would be made by walking, cycling or public transport by 2041.

There are also plans to reduce all traffic by between 10 and 15 percent by 2041.

One of the most ambitious plans is the Mayor’s target to reach net zero carbon emissions by 2030, 20 years earlier than the UK Government’s plans for the rest of the country.

The Mayor specifically highlights that in 2019, around 4,000 Londoners died prematurely because of the toxic air through high carbon dioxide, nitrogen oxide (NOx) and PM2.5 levels.