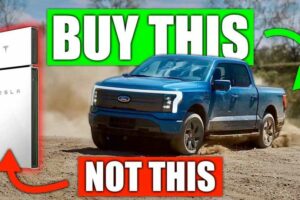 Tesla has already installed more than 250,000 Powerwall home energy storage systems (as of November 2021), but is it a good idea to buy one or a few when you can buy an electric pickup truck?

At first, it might bring confusion as to what a pickup has to do with a stationary home energy storage system (ESS).

Well, the all-new, all-electric Ford F-150 Lightning offers a special feature: Intelligent Backup Power capability (9.6 kW), so it can act as a power source for the entire home (as long as there is an 80A Ford Charge Station Pro). It’s an energy storage system on wheels.

In an interesting video, Engineering Explained figured out that the Ford F-150 Lightning not only can provide backup power or work together with a solar system, but it might be less expensive than multiple Tesla Powerwalls. Intriguing.

Let’s do the math for a system designed to provide several days of electricity. The 13.5 kWh Tesla Powerwall cost is about $7,500 and can provide up to 5.8 kW continuous (10 kW peak backup).

In the case of the Ford F-150 Lightning (entry-level Pro), there are two battery versions:

The costs of the entire system are of course higher in both cases, including one Tesla Powerwall+ with an inverter and the other infrastructure required (transfer switches and installation).

Anyway, the difference in battery cost is tremendous, respectively: $10,831 and $23,331 for a similar battery capacity that would be good for several days of backup power (without saving).

In the case of the Tesla Powerwall, the power output will be much higher – 10 kW per each unit (but actually not necessarily needed for a house). In the case of Ford, it not only cost less, but we get a fully functioning truck. One can decide whether to keep it idle/connected forever (in this theoretical example) or use it from time to time to drive.

It’s quite amazing and surprising that the Ford F-150 Lightning would undercut one of the most popular home energy storage systems in the case of installations bigger than average (we guess that in most cases customers need just 1 or maybe 2 Powerwalls for basic needs and solar arrays).