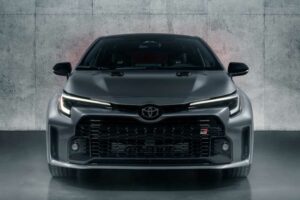 The all-new 2022 Toyota GR Corolla is available in a two flavors: Entry-level Core, and the winged, vented—or, at least, more-winged, more-vented—Circuit Edition. That’s the dark gray car you see in the photos here, which will sit atop the GR Corolla family. If you’re into the look, which includes a bigger rear wing, forged carbon-fiber roof panel, Brin Naub sueded sport seats, and an “exclusive Morizo-signed shift knob,” allow us to clarify some of the language Toyota used when introducing the variant. It’s one-year-only.

The news is something of a bummer, though it’d be less upsetting if it turns out Toyota will offer some of the Circuit Edition’s goodies as accessories or options on future GR Corolla Core models. We’d especially love to see the forged carbon roof panel (pictured below) survive the 2023 model year; even though its weight savings appear minimal compared to the Core’s standard roof, the bare carbon material resembles the forged carbon Lamborghini has been playing with the past few years.

Lambo looks on a Corolla? It’s too good to pass up or let fade into that beige Toyota graveyard in the sky after 2023. Ditto the Circuit Edition’s bigger rear wing, which sticks out farther than the Core’s subtler unit and does a better job of visually anchoring the Corolla’s somewhat doughy shape. The square-ish hood vents? Those could go away, we suppose, but on a car as wild as this, we think they deserve to migrate to future Core iterations.

We still don’t know how much the Circuit Edition will cost, so if you think you can afford the roughly $40,000 estimated price tag we think it’ll have (if not higher), we suggest finding a way to put an order in now if you want one. It isn’t yet known whether Toyota will cap production of the limited-edition Circuit model, or how many other shoppers you might need to compete with for one. As for everyone else, let’s just hope some of the Circuit Edition’s fun parts are recycled as factory hop-up bits and made available as accessories for buyers of the Core version (pictured below).