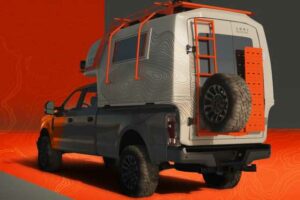 There’s a big difference between needs and wants. You need some sort of transportation to carry out daily activities such as commuting to work or school, running errands, and accessing general activities. Yet, you do not need a Bugatti.  Similarly, while you do need some sort of shelter when you’re in the middle of the wilderness, you probably do not need a Loki Basecamp Icarus slide-in truck camper.

Bugattis and Loki Basecamps live at the farthest edges of their respective spectrums of usability. Both are lavish and extravagant wants, not needs. Their mere presence in a driveway makes a statement that the unobtainable has been obtained.

Loki Basecamp is an adventure lifestyle brand fabricating out of Quebec City, Canada, with another facility coming in Colorado. The company makes high-end, fully custom off-the-grid slide-in campers for midsize and full-size pickup trucks and forthcoming EV trucks such as the Rivian R1T, Tesla Cybertruck, and Ford F-150 Lightning.

Adding to its Falcon Series and EV Series lineup of truck bed campers is the Icarus Series. The Icarus 6 fits Ford, Toyota, Ram, GMC, and Chevrolet pickups with approximately 6.5-foot beds, while the Icarus 8 fits the 8.0-foot bed configurations. Starting at $69,000 (and no, that doesn’t include the actual truck), the Loki Basecamp Icarus is flat-out economical in contrast to the $95,000 entry point for the Falcon and EV Series.

The core structure of the Loki Basecamp Icarus is a Spacekap Diablo, a fiberglass hull more often utilized in the upfitting of work truck fleets and plumbing, electrical, construction, and other contractor service vehicles. In what has to be the most radical, creative, and futuristically cool transformation of a Spacekap product, Loki Basecamp adds structural reinforcement, high-end double density synthetic composite insulation, lavish interior amenities, and cutting-edge exterior elements to create the Icarus, a fully self-contained, off-the-grid safe haven adventure pod.

Loki Basecamp campers are not your average, cookie-cutter, run-of-the-mill campers. Rather, they’re all custom-made and specifically tailored to customers’ specific objectives, whether that be recreation, sports, business, or other off-grid adventures that attract customers to Loki Basecamp. When it comes to configuring the Icarus’s mudroom, lounge area, kitchenette, and bedroom area, there is a long list of options: Pick the colors, finishes, features, accessories, and components.

For one million dollars, as Dr. Evil would say (okay, actually not even close to that much), the Icarus offers everything but the kitchen sink. Wait—actually, you can get the kitchen sink, too. You know you don’t need it, but you probably now want it …