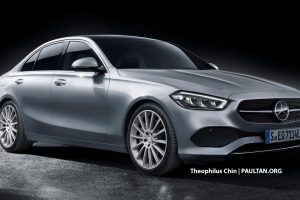 Not too long now until the W206 Mercedes-Benz C-Class will be revealed, as the current W205 model is already at the tail end of its typical seven-year lifecycle. With the latest G20 BMW 3 Series mounting a strong challenge, Stuttgart is responding reasonably quickly, as you can see from the image of an undisguised unit posted a couple of weeks ago.

Using this sole image (and the new W223 S-Class) and past spyshots as a starting point, our Photoshop wizard Theophilus Chin has whipped up these renders of the new compact executive sedan. Here, you can see that the C-Class will stylistically be quite a departure from the handsome W205, adopting the brand’s latest design language first seen on the facelifted W213 E-Class.

The new face incorporates trapezoidal headlights and arrow-shaped daytime running lights that flank a wider six-point grille, which will likely continue to be available with either the small freestanding three-pointed star or the Avantgarde and AMG Line’s dinner plate-sized badge. Underneath is a bone-shaped full-width air intake that sits above a centre inlet.

In keeping with the sedan’s hierarchy, the render shows single-point driving lights (the E-Class and S-Class have two- and three-point lights, respectively). The headlights here are LED reflectors, but there will likely be the more advanced Multibeam LEDs available as an option, while the S-Class’ new, high-definition Digital Light units – which can be used to display warnings, icons and guidelines – may also be offered. We’re expecting the silhouette and general proportions to remain largely similar to the current car, even though it’s inevitable that the C-Class will grow significantly to match the G20. Spyshots show that the shape of the windows will also be kept, but the shoulder line will be moved upwards past the door handles, just like the S-Class. Unlike its bigger sibling, however, it doesn’t look like the W206 will get the cool pop-out door handles. Sorry about that.

The rear end is where you’ll find most of the similarities with the S-Class, sporting triangular two-piece tail lights joined by a full-width chrome strip. Again, based on the spyshots, the inner parts of the lamps will be rectangular, forming more of an L shape. The blacked-out bumper insert with integrated twin tailpipes is very similar to the outgoing model.

As the spyshot above shows, the interior of the W206 will be a huge departure from its predecessor. Like the S-Class, there will be a freestanding instrument display and an infotainment touchscreen on a waterfall-like centre console, with air vents placed on top of the dashboard. The C-Class will get discrete climate controls, however, although it remains to be seen if a larger portrait touchscreen (which should integrate the climate controls if it were offered) will be available as an option. In an interview with Australia’s CarsGuide, Mercedes boss Ola Källenius said that the C-Class will be a “small S-Class”, so it should get much (if not all) of the new features. This will likely include the latest driver assistance systems, with Level 3 semi-autonomous driving already promised for the S-Class in the second half of 2021. The new augmented reality head-up display and 3D instrument display could also appear.

As for the engines, expect the C-Class to be offered with a full four-cylinder lineup for the first time. Not only should it get the W213 facelift‘s new M254 2.0 litre turbocharged petrol engine and a similarly-sized OM654 turbodiesel (both with 48-volt mild hybrid technology), but the full-fat AMG C 63 is also getting shorn of four cylinders, making do with the A 45’s M139 2.0 litre four-pot augmented by hybrid technology.

We should be less than a year away from the W206’s introduction – Källenius said that the new C-Class’ introduction will be nine months behind the S-Class’, which would put it somewhere in June.