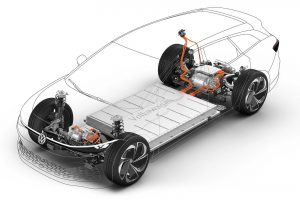 But where is the “ID.” prefix?

By the way of announcing its strategic investment plans, Volkswagen revealed also that in 2023 it is going to start the production of a new all-electric car at the Emden plant in Germany.

The site is currently preparing for production of the ID.4 (from 2022), as a second plant in Germany (after Zwickau), and sixth globally (besides two places in China and one in the U.S.).

After the ID.4, Emden will start production of a new four-door model “Aero”, about which we don’t know much.

“At the Volkswagen’s brand plant in Emden, the transformation is also progressing rapidly: while the construction work for the switch to electric mobility is fully on track, the second electric model for the site has now been defined. In addition to the ID.4, the four-door all-electric Volkswagen Aero is scheduled to be manufactured there from 2023.”

Here is no “ID.” prefix, but we would not be surprised to see an ID.Aero announcement in the near future.

Volkswagen Group’s broader plan is to introduce around 70 all-electric models by 2030 and 20 are already in production. The number of hybrids (all types) will almost double to 60.

Cumulative sales of BEVs will reach 26 million by 2030, including 19 million based on the MEB platform. Most of the rest will be based on the PPE platform developed by Audi and Porsche. Sales of hybrids within those 10 years will reach 7 million.