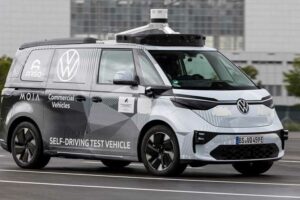 Volkswagen and autonomous developer Argo AI unveiled a prototype of the ID. Buzz at the Munich IAA this week, previewing an electric robotaxi VW intends to launch by 2025. While the exterior of the ID. Buzz itself, slated to arrive next year minus the autonomous bits, had already largely been revealed, the robotaxi version of the electric Microbus had not been seen before. The prototype is therefore a good look at what VW and Argo intend to launch in Hamburg, Germany, in a few short years as part of a ride-pooling service with no driver behind the wheel. The service will be run by MOIA, the automaker’s mobility service arm.

Wearing a large sensor pod on the roof, the ID. Buzz robotaxi prototype features six lidar sensors, 11 radar sensors, and no fewer that 14 cameras to detect objects as far away as 1300 feet, with Geiger-mode technology to scope out even a single photon of light, useful in detecting objects with low reflectivity. The ID. Buzz AD (Autonomous Driving) prototypes will be used in testing in a number of sites prior to the launch of the ride-pooling service in 2025, including on a closed course not far from the Munich airport.

At the moment the long-term plan is that of a ride-pooling service, rather than a taxi that can be hailed on a whim via an app, so the resulting production version will likely be classified as Level 4 autonomous vehicle, being able to operate without a driver under limited conditions. It won’t be able to roam everywhere or sneak into unmapped environments. 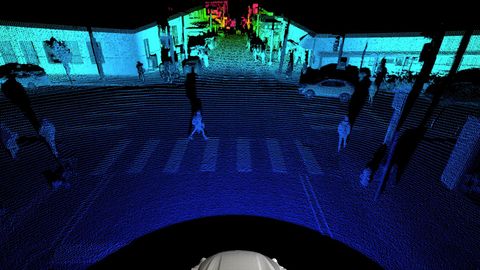 “The ID. Buzz AD test fleet represents a milestone in our partnership with Volkswagen Commercial Vehicles,” said Bryan Salesky, founder and CEO of Argo AI. “Building on our five years of development and learnings from our operations in large, complex US cities, we are excited to soon begin testing on the streets of Munich in preparation for the launch of the self-driving commercial ridepooling service with MOIA.”

Even setting aside years of software development, the costs of the hardware that will need to be in Level 4 robotaxis by 2025 will still need to be covered by fare-paying passengers, and someone will still need to service and charge the electric vehicles. VW is certainly working on charging robots to make even those human-performed tasks redundant, but it’s still difficult to picture each robotaxi landing under the $100,000 threshold purely in regards to hardware, before any operating costs. So while VW and others are certainly expected to be able to operate robotaxis in some cities by 2025, the matter of doing so profitably may take some while longer to solve.

“An environment recognition system from six lidar, 11 radar, and 14 cameras, distributed over the entire vehicle, can capture much more than any human driver can from his seat,” said Christian Senger, head of autonomous driving at Volkswagen Commercial Vehicles. “The brand has set up its own business unit for the development of autonomous driving and has acquired a stake in Argo AI.”

Having invested $2.6 billion into Argo AI a couple of years ago, VW is certainly betting on a robotaxi future arriving at some point this decade, at least on some scale. But the larger world of driverless mobility, as within reach as it seems at the moment with Level 4 testing going on around the world, has yet to materialize on a scale that can compete with human drivers and the costs that they pose.