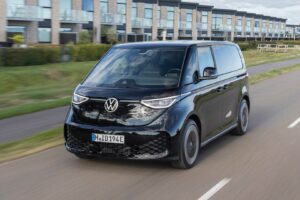 Volkswagen Commercial Vehicles (VWCV) has provided an update regarding demand for the ID. Buzz, revealing that it currently has around 12,500 preorders for the electric van, compared to 10,000 a month ago.

Interestingly, almost half of these—more than 6,000—are for the ID. Buzz Cargo, VWCV boss Carsten Intra told Germany’s Automobilwoche (via Electrive). The executive also revealed that the delivery time for the ID. Buzz is currently around six months.

For an order placed now, the delivery is expected at the end of the first quarter 2023, in March or April. However, the earliest reservation holders will start getting their ID. Buzz electric vans from November 2022. Volkswagen will first ship vehicles to its dealers to be used as demonstrators, starting after the IAA Transportation show in Hanover.

“Of the 15,000 or so vehicles we will build in 2022, not all can be delivered to customers immediately. We first have to stock the dealers first. So the first 6,000 vehicles will go into the showrooms, then the customer vehicles will come.”

As we previously reported, production for the 2022 calendar year is virtually already sold out, with Carsten Intra reiterating that carmaker’s surprise about the high demand for the ID. Buzz despite the fact there are currently no vehicles at dealers and no customers have seen, touched or driven the electric van.

The German carmaker also revealed details about the planned production ramp-up at the Hanover plant. According to Intra, the facility currently builds 100 ID. Buzz vehicles per day, a number that should grow to 200 units per day by the end of the year. But the real increase in output will be coming in 2023.

“And next year we will really ramp it up. It should already be heading towards 100,000.”

Going forward, the automaker is reportedly already thinking about expanding capacity to conquer new markets in Asia, such as Japan, China, Thailand and Malaysia. As a result, the Hanover plant may not be the only one making the ID. Buzz, with the Poznan plant in Poland named by Intra as the only other site likely to get the ID. Buzz.

As for the possibility of making the ID. Buzz in the US, Intra said that this may come into question after the sales launch in the United States in 2024.