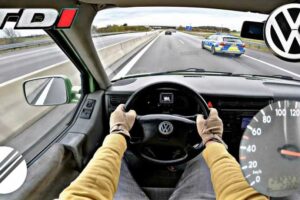 Known as the EuroVan in North America, the Volkswagen Transporter T4 was a van that had a pretty long life by today’s standards in the automotive industry. Launched in 1990, it remained in production and on sale until 2004 with the later examples featuring visual and mechanical modifications compared to the earlier models. It was never meant to be especially fast, though there were versions that had decent power and acceleration.

A new video from TopSpeedGermany takes us to the German Autobahn for a ride onboard a 1999 VW T4 with the said 2.5 TDI engine. The van with a turbocharged direct injection diesel motor has clocked 181,440 miles (292,000 kilometers) but seems to be in good overall shape, aside from a lamp on the instrument cluster indicating problems with the airbag system.

For the uninitiated, the 2.5 TDI is an inline-five unit which is a rare engine layout for a Volkswagen product. In its most powerful iteration, it was produced between 1998 and 2003, and there were also less powerful variants available from 1995 until 2004 when production of the T4 came to an end.

It’s a little surprising to see an old bus on the Autobahn’s left lane but this T4 is fast enough to stay where far newer BMW, Mercedes-Benz, and Audi models usually drive. The highest speed hit by the van is around 118 miles per hour (190 kilometers per hour) when the engine is at about 4,000 rpm. Keep in mind there’s an old diesel engine under the hood.