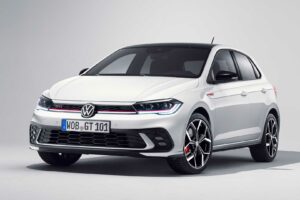 Automakers have warned us stricter emissions regulations could accelerate the demise of small cars equipped with combustion engines. The Euro 7 standard has a proposed start date of July 1, 2025. According to an estimation made by the European Commission, it will increase the asking price of a new car by €90 to €150. This revised proposal projects a significant reduction of costs as the initial proposal estimated a bump in the price of €304.

€150 or even €304 wouldn’t be such a deal-breaker, but Volkswagen CEO Thomas Schäfer cautions the reality is completely different. He believes something like a subcompact hatchback will be €3,000 to €5,000 more expensive, which would effectively kill the car by making it unaffordable to the people shopping in this segment.

Aside from adding a mild-hybrid system, the company’s boss told Autocar at the 2022 Los Angeles Auto Show that automakers will also have to comply with stricter safety regulations that will require installing pricy tech. He went on to say the engineers need a couple of weeks to figure out whether it’s worth investing in small ICE-powered cars:

“At the moment, we have engineers evaluating what that means. But if that is true [the expected impact of EU7 on the price of cars], we definitely won’t invest anymore and we’ll just keep the plan to electrify as quickly as possible.”

The beginning of the end for small gasoline-fueled cars has already been signaled by Ford with the announcement it recently made about discontinuing the Fiesta in 2023. It was a huge blow to Blue Oval fans considering the B-segment model has been around for nearly 50 years and multiple generations. The VW Polo is about the same age as the Fiesta, and both have catered to enthusiasts with multiple hot hatch versions.

Stellantis will go EV-only in Europe by the end of the decade, effectively meaning conventionally powered models like the Peugeot 208, Opel Corsa, and Citroën C3 will be discontinued by 2030 or even sooner.