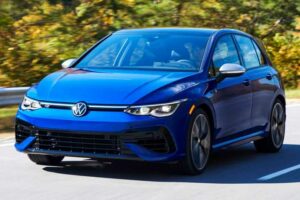 Just yesterday, Volkswagen announced a new generation of its 1.5-liter turbocharged gasoline engine, and today there are more novelties coming from the German company. The Wolfsburg-based automaker reveals upgrades to its American model lineup, which may not be as significant as the new 1.5 TSI, but arrive as a nice boost for the 2023 model year.

Starting with the Arteon, it is available in three trim levels for 2023, SE R-Line, SEL R-Line, and SEL Premium R-Line. The base model now gets standard LED headlights with adaptive cornering function, an illuminated light bar in the front grille, and a power boot. A heated steering wheel and added driver assistance technologies round off the improvements inside the cabin. The base 2023 Arteon starts at $42,530 before destination fees.

The Golf GTI, in turn, gets a new 40th Anniversary Edition model, which slots between the S and SE grades. The base 2023 Golf GTI starts at $30,180 with a six-speed manual and $30,980 with a seven-speed dual-clutch. Likewise, the more powerful Golf R gets 20th Anniversary Edition, but details about its equipment will be released at a later date. The most affordable 2023 Golf R has a starring price of $45,090.

Moving to the Jetta and Jetta GLI, the 2023 model year brings minor cosmetic changes and a remote start for the SE models. The 2023 Jetta starts at $20,415, while the sportier GLI version comes with a new Autobahn grade wearing a price sticker of $31,345.

Moving to Volkswagen’s SUV family, the Atlas and Atlas Cross Sport are both available in five trim levels for the 2023 model year – SE, SE w/ Technology, SEL, SEL R-Line Black, and SEL Premium R-Line. New for the second grade is a standard 10.25-inch fully configurable digital instrument cluster, while the rest of the lineup gets minor visual tweaks. The base 2023 Atlas with a 2.0-liter engine starts at $34,600, while the most affordable 2023 Atlas Cross starts at $33,910.

The Taos receives additional equipment to every trim level and there’s more safety tech standard for all models. The S 4Motion trim now rides on standard 18-inch wheels, while the SEL model gets a panoramic sunroof as standard. The base Taos kicks off at $24,155. Last but not least, the 2023 Tiguan adds new 19-inch alloy wheels as standard for the SE R-Line Black models. Prices begin at $26,590 for the entry-level S trim.