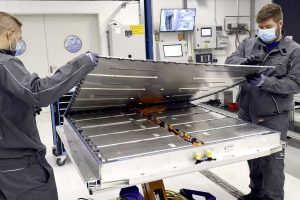 Electric cars have been around just long enough for the oldest examples produced in any great number to eclipse a decade old. We’re not talking about various rarities or even the first-gen Tesla Roadster, but rather early mass-produced PHEVs like the Chevy Volt and EVs like the Nissan Leaf. That’s still not an exceptionally long time for a car, electric or otherwise, to be on the road, given the average age of cars on the road today, but soon we’re going to see the first big wave of EVs going to that big farm upstate—that’s when the issue of battery recycling and replacement for older EVs will become truly pressing.

So how will automakers that produced the EVs in the first place address this issue?

Volkswagen is only just getting ready to launch its ID.4 stateside, but it’s already planning for a time when EV battery recycling will be an issue owners, dealerships, automakers, and suppliers will need to face. Volkswagen Group Components has just launched a pilot plant in Salzgitter, Germany, that will assume end-to-end responsibility for EV batteries.

“Volkswagen Group Components has achieved a further step in its sustainable end-to-end responsibility for the battery as a key component of electric mobility,” said Thomas Schmall, chairman of the board of management of Volkswagen Group Components. “We are implementing the sustainable recyclable materials cycle—and play a pioneering role in the industry for a future-oriented issue with great potential for climate protection and raw material supply.” 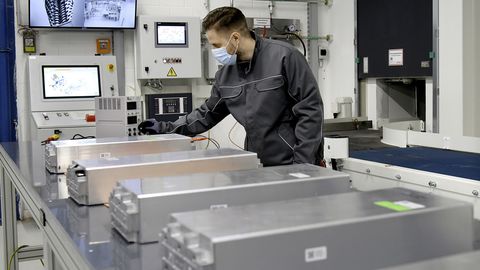 The first step of battery recycling may not be exactly what EV owners expect—determining whether the battery can or cannot be used as-is in other applications, such as a flexible rapid charging station or mobile energy storage systems. If not, then the task is to recover valuable metals used in its composition, including nickel, lithium, manganese, and cobalt, in addition to copper, aluminum, and plastics. Of course, before any disassembly, the battery has to be completely discharged.

The shredding process in the plant then begins, with the mechanism grinding the battery parts into granules. Shredding yields “black powder” that, in addition to the metals listed, also provides graphite; all are then separated using hydrometallurgical processes that involve chemical agents and water. This separation phase is performed by VW’s partners, already established metallurgical plants that can perform it more economically. Once separated, the raw materials can then be purchased by EV battery manufacturers and turned into new lithium-ion batteries.

VW aims eventually to achieve a recycling rate of over 90% of battery components that can be reused. The pilot plant will have a capacity to initially recycle up to 3,600 battery systems a year, recovering over 1,600 tons of materials. (Dealing with tens or hundreds of thousands of EV batteries at all? That will come in later years.)

“As a consequence, essential components of old battery cells can be used to produce new cathode material,” says VW Head of the Business Unit Technical Development & E-Mobility, Mark Möller. “From research, we know that recycled battery raw materials are just as efficient as new ones. In the future, we intend to support our battery cell production with the material we recover. Given that the demand for batteries and the corresponding raw materials will increase drastically, we can put every gram of recycled material to good use.” 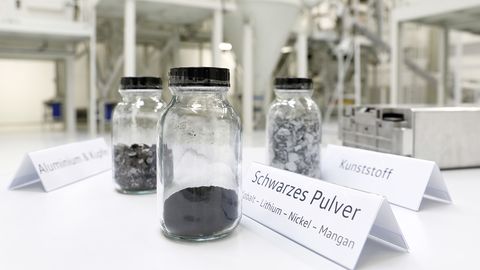 We won’t see a flood of discarded EVs piling up in storage lots anytime soon, so VW’s current capacity is about perfect for the numbers of used EVs that Germany will see for the next few years. By the end of the decade, the earliest Nissan Leafs will be almost 20 years old and there will be a much more pressing need to recycle their batteries, either putting them to use in home-based energy storage systems or recovering their metals for new battery manufacturing.

Another aspect of EV battery recycling that we don’t have to deal with yet is the issue of new battery types. It’s likely that not long after lithium-ion battery recycling begins in volume, solid-state batteries with polymers will be hitting the market, and they’ll likely represent a much more diverse category of materials.

Will people keep EVs on the road for as long as they’ve been keeping gas cars, or do you expect the life of EVs to be longer? Sign up for comments and let us know your opinion.