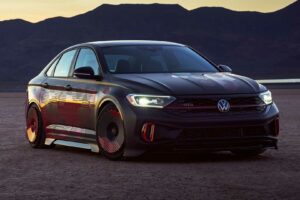 Following yesterday’s debut of two Volkswagen concept vehicles, the Wolfsburg-based automaker has another show car making its first appearance at the Specialty Equipment Market Association show in Las Vegas. The Jetta GLI Performance arrives as a motorsport-inspired version of the sporty sedan paying homage to Jetta’s touring car history. It comes with many visual and hardware upgrades, turning it into a much more potent machine than the stock Jetta GLI is.

Starting with the exterior, the concept that is based on a 2022 Jetta GLI Autobahn now features 0.8 inches wider front and rear fenders, giving the small sedan a more muscular appearance. This nicely matches the larger side skirts and the larger air intakes in the modified front bumper. The body is finished in matte black color with a custom hexagonal-themed vinyl wrap. Completing the design changes is a set of 20-inch Rotiform monoblock wheels with custom covers.

What happens under the hood is surely more interesting, though. There, the stock 2.0-liter engine receives a new performance package from RacingLine, which includes a carbon fiber cold-air intake, a new intercooler, an oil management kit with a new oil cooler, and other hardware upgrades. The result is a peak output of 350 horsepower (261 kilowatts) and 372 pound-feet (504 Newton-meters) of torque, up from the factory 228 hp (170 kW) and 258 lb-ft (350 Nm) of torque.

The power reaches the front wheels through the vehicle’s stock six-speed manual gearbox mated to an upgraded performance clutch package. Acceleration figures are not available at the moment, but we expect the 0-62 miles per hour (0-100 kilometers per hour) time to be around the five-second mark.

Stopping power for the Jetta GLI concept is provided by a new six-piston forged caliper brake kit with carbon-ceramic discs. An upgraded coilover suspension kit with lowering springs and fully-adjustable solid top mounts delivers what Volkswagen describes as “a track-worthy suspension that is just as at home on the street.”

See all the news about the SEMA Show

Will it go into production? Not in this form. However, Rotiform will make the concept’s wheel graphics available for download here so you can actually put them in your Jetta GLI.