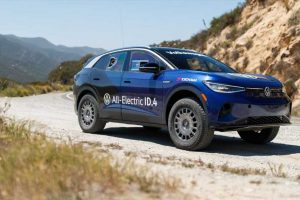 A specially prepared Volkswagen ID.4 electric SUV is running the National Off-Road Racing Association (NORRA) Mexican 1000 race April 25-29 on the Baja Peninsula. Rhys Millen Racing modified the ID.4 and Tanner Foust and off-road racer Emme Hall are doing the driving. VW says the SUV is running a stock powertrain and an 82-kWh battery pack with a modified off-road suspension and racing interior for the 1,100-mile competition. The company says it aims to show the capabilities and performance of an EV in an extreme environment. VW officials told Autoweek that at this point the 1000 is a one-off event for the ID.4. “Just putting our toes in the water,” the official told us. 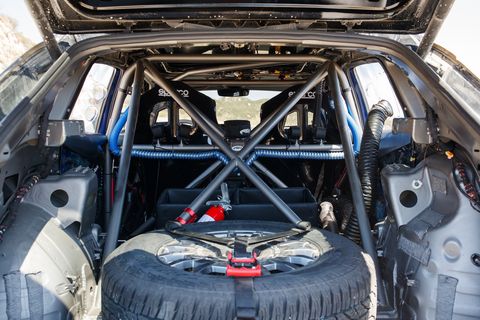 To charge the ID.4 out in the wild, VW is using a portable biofuel generator powering a 50-kW portable fast charger. This year’s NORRA Mexican 1000 race is being run in loops thanks to COVID travel restrictions. The team hopes to complete each stage in the loop event without the need for recharging. 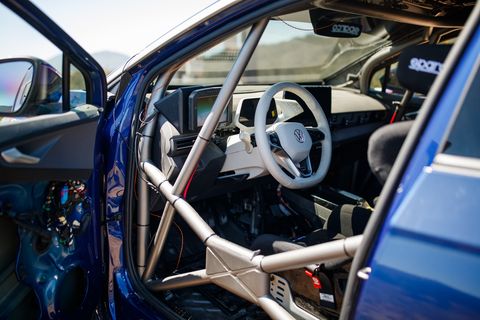 While the 201-hp electric motor, battery pack, and drive systems are stock, the SUV’s electronics have been given extra protection from the elements, and the ID.4’s interior has been stripped and modified with a roll cage, racing seats, and supplemental screens for data like battery temperature.

The suspension was also thoroughly reworked with rally-style coil-over struts and tubular lower control arms in the front and boxed lower rear links. The radiator was raised several inches to improve approach angles and cooling capacity, and 3/8-inch steel skid plates were added. The 19-inch wheels were swapped for 18s with 255/70 tires with more sidewall for cushioning and wheel travel. The body was also lifted a total of about 2 inches from stock. 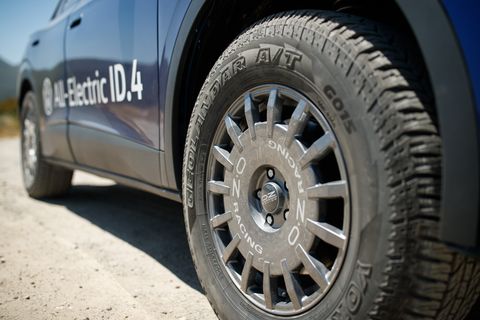 Foust said early driving tests showed the ID.4 performed best when left in its regular drive modes, with traction control and the “B” level battery-regeneration setting engaged. The SUV’s low center of gravity and advanced traction control, thanks to the electric motor’s seamless torque, means the prepped ID.4 can move quickly through many types of terrain and still recapture energy through its regenerative braking system.

As this is written, April 27 at 8 a.m. Eastern, Foust and Hall are in 78th place. VW officials told Autoweek the ID.4 has had no mechanical issues so far but did get stuck in some sand and had to be dragged out, costing a bit of time.

Volkswagen is no stranger to off-road racing in Baja. In fact, a Beetle-based Meyers Manx won the inaugural NORRA Mexican 1000 in 1967. These days the race has several classes of classic and contemporary off-road vehicles and motorcycles, and this year’s route covers 1,141 miles total. That’s roughly the distance between Nashville and Miami, with 893 miles off pavement.

Log in to the comments and let us know what you think of the latest VW racer.