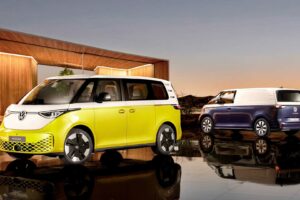 Volkswagen has announced pricing for the ID. Buzz and ID. Buzz Cargo in Germany and it turns out the people-carrier version is the most expensive member of the ID. family so far.

Keep in mind that these prices also include 19% VAT, which doesn’t exist in the United States, so the pricing should look slightly better stateside, especially with the full federal tax credit applied. Mind you, the US market will only get the long-wheelbase variant of the ID. Buzz, which will obviously be more expensive than the short-wheelbase model.

Back to Europe, the configurator for the ID. Buzz and ID. Buzz Cargo will go online on May 20 when pre-sales will begin in Germany and most markets of Europe. The first vehicles will be delivered to customers this autumn.

Speaking of markets, Volkswagen says the most important countries for ID. Buzz sales will be Germany, Great Britain, Norway, France, Sweden, the Netherlands, Italy, Austria, Belgium and Spain. According to VW’s sales forecasts, around 90% of ID. Buzz registrations in Europe will be spread between these countries.