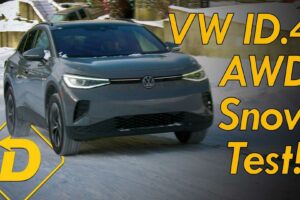 We’ve driven the Volkswagen ID.4 on a number of occasions and we mostly have great things to say about it. We like its powertrain, its driving dynamics, range and tech, but we have not tried the new dual-motor, all-wheel drive version, which in the United States wears the AWD Pro (or Pro S) badge, while in Europe it’s badged as GTX and it gets a light sporty makeover.

The dual-motor ID.4 isn’t really meant to be sporty, although it is fun to drive, but the extra traction it provides may prove vital for people living in snowy areas. Tom Voelk of Driven Car Reviews loved the dual-motor ID.4 after his review in Seattle, where he put it to the test not only on dry roads, but also in the snow.

His tester was on all season tires, and this made Tom question how well it would perform in the snow, but that was soon dispelled as he observed just how surefooted it was. The vehicle had no problem going up fairly steep gradients on snow-covered roads, pulling undramatically uphill with all four wheels.

The ID.4 all-wheel drive also gains a dedicated Traction mode that essentially forces both motors to work and power the wheels at lower speeds. Tom didn’t really find it necessary to use it that much, suggesting that the vehicle could potentially handle even deeper snow and generally more extreme conditions.

The extra hundred horsepower provided by the second motor, bringing the total to 299 horsepower, also adds to the experience, making the vehicle feel quicker than the figures would suggest. AWD increases the ID.4’s base price by around $3,400, although it still qualifies for the $7,500 federal tax credit, making it an even more attractive buy.