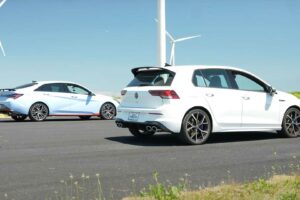 The Hyundai Elantra N is a light and quick sedan. It can sprint from 0-60 miles per hour (97 kilometers per hour) in 5.1 seconds, but it’s not as quick as the Volkswagen Golf R. The hot hatchback is quicker by a bit, clocking in the same spring at 4.7 seconds.

While these numbers aren’t far from each other, the story’s different in a real-world setting, especially in a drag race. And as it turns out, the Golf R has even more advantage in a straight-line competition.

In this drag race, courtesy of Sam CarLegion on Youtube, the Hyundai Elantra N tried to take on the VW Golf R – and failed. We’re talking about starting from a dig where the German hot hatch crushed the Korean sports sedan in three rounds. On all three, the Elantra N’s view was the Golf R’s taillights with a notable gap between the two.

To be fair, the Elantra N was less powerful than the Golf R, although it’s lighter than the VW by around 60 pounds (27.2 kilograms). Both vehicles came with dual-clutch automatic transmissions, with the Hyundai having more gears.

However, the biggest advantage of the Golf R was its all-wheel drivetrain. As seen in the video, the Elantra N was struggling to gain traction, as compared to the Golf R which had almost perfect launches.