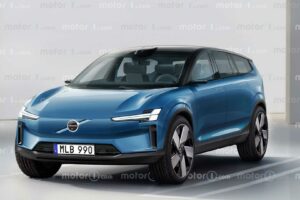 New details have emerged about Volvo Cars’ future electric vehicle plant in Slovakia, which will start building next-generation EVs in 2026 after a $1.25 billion investment.

The automaker’s first new factory in Europe since 1965 will build cars based on a successor to the EV-only SPA2 platform, which will soon underpin Volvo’s upcoming flagship SUV and the Polestar 3 sister model—both expected to enter production at the carmaker’s plant in Charleston, South Carolina later this year.

Volvo Cars’ head of global manufacturing, Geert Bruyneel, confirmed to Automotive News Europe that EVs made in Slovakia will use a successor to SPA2 and said the architecture will be the company’s most advanced at the start of production. The evolution of the SPA2 architecture planned for Kosice will be done by Volvo and shared with sibling brands owned by Zhejiang Geely Holding, such as Polestar, Geely, Lynk & Co, and Lotus.

Bruyneel and Volvo’s head of industrial strategy, Erik Severinson, declined to say which car would be made at the new factory in Kosice, Slovakia. The carmaker uses the current generation of SPA (Scalable Product Architecture) on models such as the Volvo XC90 and XC60 midsize and compact luxury SUVs, so it would be logical to build an all-electric successor to the XC60 at the new plant.

Another model that would fit the bill is a future electric crossover codenamed V546 that will slot between the XC60 and XC90 in size when it debuts sometime in 2025.

Volvo’s new plant in Slovakia will utilize megacasting for large aluminum body parts, Severinson revealed, adding that the switch to the new technique for car construction will mark “the next generation in our technology journey.”

“The new plant in Slovakia gives us a once-in-a-lifetime opportunity to put the most efficient state-of-the-art factory in place.”

Asked whether Volvo plants to add battery or electric motor production at the Kosice factory, Bruyneel said that while those decisions still need to be made, Volvo has room to expand if needed.

The Swedish carmaker’s next flagship SUV, which will replace the XC90 as the brand’s flagship and will inaugurate the SPA2 platform, will be fully electric. Volvo hasn’t yet disclosed the model’s name, but has said it will break the tradition of using alphanumeric names on future vehicles.

The name Embla appears to be among those considered after it was discovered that Volvo filed for trademark protection last October for it, which in Norse mythology is the name of the first woman.