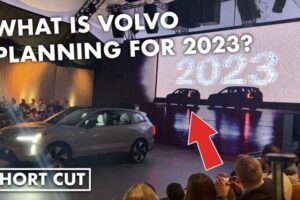 As you may know, Volvo just officially unveiled its EX90 electric SUV, which will serve as a replacement for the current midsize XC90 SUV. While the XC90 is available as a plug-in hybrid electric vehicle (PHEV), there’s not currently a fully electric version. While the excitement was focused on Volvo’s EX90 reveal, the brand also teased a smaller electric SUV.

It almost seems as though Volvo has been making plug-ins forever. In fact, the luxury brand offers just about every one of its current vehicles in a PHEV configuration. It also moved forward fairly recently with a few fully electric SUVs: the XC40 Recharge and C40 Recharge.

This shouldn’t come as a surprise to people who have been following the exponential increase in EV adoption across the globe. Keep in mind that Volvo was actually one of the first brands to make it clear it was transitioning its lineup to EVs. In fact, the brand hopes to stop selling gas-powered vehicles altogether by 2030.

Autoblog was at the recent EX90 reveal during which it recorded the brief video above. As you can see, Volvo teased a smaller electric crossover that hasn’t been shown before. The company appears to have plans to reveal the EX90’s smaller sibling in 2023. When you watch the video, you’ll see what looks like a two-row compact SUV parked near the larger EX90 for a few moments. It sort of happens “in a flash,” but it’s pretty clear what Volvo is suggesting.

The publication notes that Volvo CEO Jim Rowan made a reference to the second electric SUV at the end of the presentation. Autoblog says it may end up being the EX60, which would make perfect sense as the future replacement for the current XC60 compact SUV. At this point, we likely won’t know much more until 2023, but thankfully, that’s no longer so far away.

While many new vehicle shoppers have been waiting for larger electric SUVs and pickup trucks to come to market, a compelling compact electric SUV may ramp up sales. Compact SUVs are extremely popular on our shores, and the Tesla Model Y, which is arguably a compact/midsized crossover, is currently one of the best-selling passenger vehicles of any kind in the world.