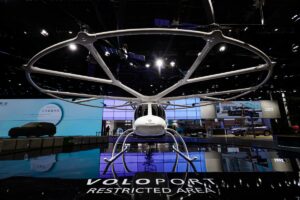 German air taxi developer Volocopter has formed a joint venture with Geely subsidiary Aerofugia to bring urban air mobility to China within the next five years, Volocopter said in a statement. Named Volocopter Chengdu Technology, the joint venture will work closely with aviation, transportation and government agencies in China.

As part of the joint venture ceremony, Volocopter also signed a contract manufacturing agreement with the new joint venture and General Aviation Manufactory Base of Geely Technology for the production of Volocopter aircraft and parts in China, and to strategically satisfy growing demand for air taxi services after its commercial launch in the country, the German firm wrote in its statement.

“Geely has been a valuable partner since they became our strategic investor in 2019. This marks another important milestone on our journey to bring affordable electric air mobility to China, the biggest single market opportunity for the UAM industry,” said Volocopter CEO Florian Reuter.

At present, Volocopter has the VoloCity and VoloConnect range of passenger craft, as well as the VoloDrone model for goods transport.

The VoloCity is a two-seater, 18-rotor air taxi that has a maximum take-off weight of 900 kg including a maximum payload of 200 kg, can travel at up to 110 km/h and has a range of 35 km. Its power supply is through a set of nine lithium-ion battery packs which can be swapped out in five minutes.

Meanwhile, the VoloDrone is a cargo-carrying craft, also with a maximum payload of 200 kg. This has a range of up to 40 km, and has been run as a proof of concept with logistics firm DB Schenker this year, following its first flight in 2019.