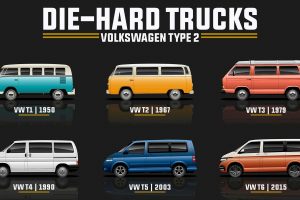 Whether you call it Kombi, Bus, Transporter, or simply a van, the Type 2 is certainly an enduring icon.

Yes, the Volkswagen Type 2 goes by many names. Officially you can call it the Transporter, as its primary mission is to transport groups of people. Unofficially, people likely know it simply as the bus, or microbus. Whatever you call it, the Type 2 holds another unofficial title as an icon that became the poster vehicle for a generation, all while evolving into an extremely versatile machine for the modern era.

It’s ironic that the inexpensive, simple engineering of the first-generation T1 model which made it so appealing now makes it extremely expensive. Should you find a mint-condition 23-window T1 bus, you can expect to pay over six figures to own it. Of course, the Type 2 has also been a panel van for hauling cargo, a dedicated camper van, and even a pickup truck featuring a single cab with a bed in the back.

Times have certainly changed since the Type 2’s humble air-cooled, rear-engined beginning. We turn back to Fleet Logging for a short retrospective on the evolution of this enduring vehicle, which spans all the way back to 1950. A seventh-generation Transporter is waiting in the wings with a possible debut happening by the end of 2020, but before that happens, here’s a look at the six Type 2 generations that came before.

The legend began in 1950, though we suspect nobody could’ve envisioned just how popular this small van would become. Its rear-mounted 1.1-liter flat-four engine was air cooled and produced just 24 horsepower, though by the end of the run that grew to 54 hp from a 1.5-liter engine. German production ended in 1967, but in Brazil production of slightly modified T1s continued until 1996.

The basic formula continued for the Type 2’s second-generation run. The split-front windshield was replaced with a single design, and the bus grew slightly both in space and weight. However, it was still a small, lovable machine available in several different body styles, be it a bus, cargo van, or a pickup truck. It also kept the air-cooled engine in the back, which ultimately evolved to become a 2.0-liter mill good for 70 hp. As with the T1, production for Euro and US models ended in 1979 but some markets saw a modified version start back up in the early 1990s. The last air-cooled, rear-engined Volkswagen was a T2c built in Brazil in 2005.

Angular lines were the hallmark of the third-generation Type 2 that entered the scene just in time for the 1980s. Slightly bigger overall, it still retained the Type 2 rear-engine design with a choice of van or pickup bodies. However, it saw the demise of the air-cooled engine in large-scale production with liquid-cooled mills arriving in 1983. The T3 also saw “luxury” items like power steering and air conditioning available for the first time. In South Africa, T3 production actually stretched into 2002 but this generation would ultimatley mark the end of the rear-engined VW bus.

Entering production before the final German T3 run in 1990, the T4 took the Type 2 mainstream with a front-engine minivan-style layout. We say minivan-style because VW still offered a pickup-truck variant in addition to passenger and cargo vans. Camper versions were also available, and while the front-engine shift took away the Type 2’s unique character, it came with a terrific infusion of power culminating in a 2.8-liter, 24-valve DOHC V6 engine making 201 hp.

No longer a small, underpowered van, the fifth-generation T5 grew to medium-sized stature for European markets. Costly import taxes led VW to drop it from its American portfolio, where sales couldn’t justify the extra expense. The front-engined T5 turned either its front wheels or all four, using a range of gasoline and diesel engines that in top-spec offered 232 hp. Ironically, the camper version of the T5 was called California despite not being offered in the US market. Cargo and passenger vans as well as a truck version were still available.

The current-generation T6 still uses the same T5 underpinnings but gained a significant design update for its 2015 launch. Though completely different from its T1 beginnings as a barebones, air-cooled van, the versatility of the Type 2 still endures. Buyers can get a new Transporter as either panel van, a passenger van, a camper, a pickup truck, or a chassis cab ready for a custom upfit. Front- or all-wheel drive is offered, with power coming from either a 2.0-liter gasoline or diesel engine.