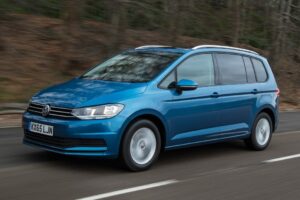 The Volkswagen Touran is a practical MPV, but it looks dated next to newer rivals