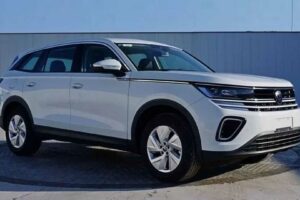 Volkswagen currently operates two joint ventures in China – VW-FAW and VW-SAIC – which compete on the market as separate companies. It is a little difficult to keep a record of all new vehicles these two firms launch, especially in the SUV segment. The Wolfsburg-based automaker doesn’t believe there is such thing as too many crossovers, though, as it is ready to launch the new Tavendor SUV in the People’s Republic.

Images released by China’s Ministry of Industry and Information Technology reveal the new large people hauler, which we spied earlier this year during pre-production tests in Sweden. The new model will sit below the Talagon in VW-FAW’s lineup, which currently is the largest vehicle Volkswagen produces. At 4.93 meters long and 2.01 meters wide, the Tavendor is slightly shorter and a few millimeters wider than the Talagon, and both SUVs share the same 2.98-meters wheelbase.

Under the long hood is a 2.0-liter turbocharged four-cylinder gas engine, available in two power stages – 196 and 220 horsepower. It is mated as standard to a seven-speed dual-clutch automatic gearbox and an optional 4Motion all-wheel-drive system. A few different trim levels will be offered when the vehicle hits the Chinese market in the third quarter of this year with a base price of about 300,000 yuans or about $44,780 at the current exchange rates. As you can see from the attached images, there’s a sportier-looking R-Line model.

As a side note, Volkswagen has two more large SUVs on sale in China marketed by the VW-SAIC joint venture. The Teramont sits between the Talagon and Tavendor and there’s also a coupe-SUV version of this model, called the Teramont X. In total, Volkswagen has nearly 10 SUVs currently available in China produced together with its two local partners and marketed as competing models.

Just recently, Volkswagen introduced the Lamando sedan in China based on the MQB Evo platform. Power comes from a 1.4-liter TSI engine with 150 hp paired with a seven-speed, dual-clutch automatic transmission. A more powerful 2.0 TSI engine, likely shared with the new Tavendor, will join the range later in the car’s life cycle.