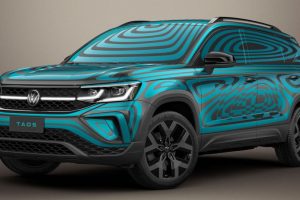 Volkswagen is continuing its teaser campaign for the upcoming Taos, which was announced last month, with a few photos of the compact SUV draped in camouflage. According to the company, the swirly pattern you see here was created by Jose Pavone, Volkswagen’s head of design for South America, with the shades of Blue Jewel and Dark Shadow.

Set to debut later this month, the photos do give us a better look at the model that will be positioned just below the Tiguan. In terms of styling, there are some interesting cues on show, including a light bar that runs across the grille, linking the headlamps. The front bumper also sports a large and exposed lower intake, with aggressive-looking inlets at the edges.

The side profile is highly reminiscent of the Skoda Karoq and Seat Ateca sold in Europe, as well as the Tharu that is offered in China. Things get even more familiar at the rear of the Taos, with taillight clusters shaped similar to those on Ateca and Tharu.

Meanwhile, the rear bumper mimics the front, with a diffuser-like element and prominent tailpipe trims flanking it. No shots of the interior for now, but expect the VW Play infotainment system – first introduced with the Nivus – to be featured.

Like the Karoq, Ateca and Tharu, the Taos will be built on the MQB platform, with assembly set to take place in Argentina for the South American region. There will also be a North American-spec version of the Taos, but that will be built in Mexico instead.

According to reports, the North American model will be powered by a 1.5 litre turbocharged four-cylinder TSI engine that makes 160 PS (158 hp) and 250 Nm of torque. The mill is paired with an eight-speed automatic transmission that drives the front wheels, with the alternative being all-wheel drive and a seven-speed dual-clutch DSG.

As for the South American Taos, a 1.4 litre TSI engine with 150 PS (148 hp) will be mated to a six-speed automatic and comes with front-wheel drive as standard. This will later be joined by a more powerful and larger 2.0 litre TSI powerplant. The Taos is set to celebrate its global premiere on October 13, with a market launch set for the second quarter of 2021 in South America and in the summer of next year in North America.