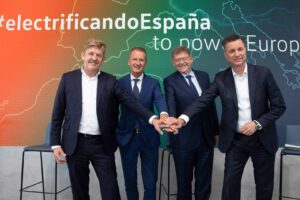 The Volkswagen Group and SEAT announced that together with partners in the Future: Fast Forward project (total of 62 companies), it will invest €10 billion ($10.6 billion) to make Spain a European hub for electric mobility.

Part of the amount, which is described as the single largest industrial investment in Spain’s history, is expected to come from the Strategic Project for Economic Recovery and Transformation program (PERTE), but the application must first be successfully accepted by the government.

One of the main parts of the entire project will be a new €3 billion ($3.2 billion) lithium-ion battery gigafactory in Sagunt near Valencia, which will supply battery cells to local EV plants (in Martorell and Pamplona).

The gigafactory in Spain (confirmed in 2021) will be Volkswagen’s third after the one in Sweden (with Northvolt) and one in Germany. Three others will be announced at a later point.

Just like the other two, the plant in Sagunt will have a manufacturing capacity of 40 GWh/year. The construction is set to start in Q1 2023, while production is expected to start in 2026.

The Volkswagen Group intends to build a total of six 40 GWh battery gigafactories in Europe to secure up to 240 GWh of locally produced batteries by 2030.

According to Thomas Schmall, Member of the Board of Management of Volkswagen AG, Chief Technology Officer and Chairman of the Board of SEAT S.A., the PERTE funds will be essential for the investment:

The first milestone must be the positive outcome of the PERTE submission and the finalisation of the permits: “We will build the battery Gigafactory with an investment of more than 3 billion euros, but the PERTE funds are essential if we are to realise our ambition of turning Spain into a European hub for electric vehicles”,

The battery plant is promised to be powered by electricity from renewable sources. A major agreement with Iberdrola will result in a new photovoltaic plant (250 hectares), located less than 10 km (6 miles) from the battery factory. According to the press release, in the first phase, it will provide 20% of the gigafactory’s total energy.