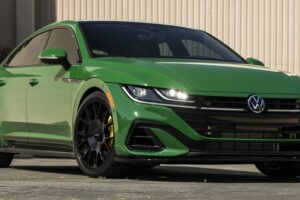 The Volkswagen Arteon is a handsome coupé-esque five-door, but perhaps not the first car that comes to mind when you think of tuner-friendly Volkswagens. Wolfsburg’s American division wants to change that by collaborating with FMS Automotive and Rotiform to create this rather fetching Big Sur concept.

Named after the central Californian coastline, this mean green machine is meant to bring the public’s attention to the Arteon in the United States, where the car isn’t exactly flying off the shelf. The makeover starts with this strikingly verdant colour scheme, which is actually a custom vinyl wrap inspired by a Golf R that Rotiform showed at the 2019 SEMA Show.

Notably, the wrap covers every inch of the Arteon – including the interior door jambs and side body pieces – so that the colour change is still visible when you open the door. “I’m really proud of the amount of detail and attention we put into it,” said FMS’ Gil Placensia, who helped design the car. “We took all the doors off the vehicle – the hatch, the hood [bonnet] – and spent a good 50 to 60 hours to ensure it was all perfect. Looking at a distance, it looks like it’s a paint job.” The Big Sur also gets a custom front splitter, side skirts and rear spoiler, based on the Lower Valence bodykit for the pre-facelift Arteon from Japanese tuner Voomeran. The coilover suspension also enables the car to sit some 38 mm lower on its 20-inch gloss black Rotiform TUF-R cast monoblock wheels, shod with 245/45R20 Continental ExtremeContact DWS06 Plus tyres.

Underneath all these upgrades is a facelifted Arteon in range-topping SEL Premium R-Line trim, powered by the standard 2.0 litre TSI turbocharged four-cylinder engine making 268 PS and 350 Nm of torque. Unlike in other markets, the US-spec car uses not a DSG dual-clutch transmission but an eight-speed automatic.