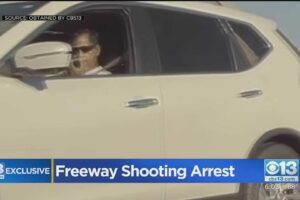 Video of the incident went viral on TikTok, and the California Highway Patrol used it to identify the assailant.

Whether on the move or stationary, the multitude of cameras fitted to Tesla vehicles produce vast quantities of footage, more often than not shocking in nature.

That was exactly the case with the built-in dashcam fitted to the brand-new Tesla (apparently a Model Y) of Razvan Glavan. He found himself assaulted with a strange weapon out of the blue on June 29 while driving along southbound Interstate 5, near Cosumnes River Boulevard in the Sacramento area.

Since the projectile fired by the man driving a previous-generation Nissan Rogue shattered his window, potentially endangering his life, the Tesla owner posted the video on several social networks, hoping someone will recognize the assailant.

It clearly helped that Glavan listed the suspect’s license plate number, urging people to call authorities if they saw him. The video went viral on TikTok and was picked up by the California Highway Patrol, which used it to find the culprit.

Upon serving a search warrant on Wednesday in the North Sacramento area in connection with the incident, CHP identified the man as 42-year-old Jose Eliseo Capacho Bonilla. Officers found him sleeping in the same SUV featured in the Tesla video.

After a quick search of his Nissan, they also found two homemade contraptions used to fire projectiles, several BBs, and nearly a dozen rocks shaped into round balls. According to CBS Sacramento, Bonilla was arrested and is now facing felony charges of vandalism, assault with a deadly weapon, and throwing a substance at a vehicle. CHP said it is investigating six similar incidents that occurred around the same area, with reports of the other incidents matching the description of Bonillo’s car.

Glavan told the same news outlet he was grateful he wasn’t seriously hurt and no one was near the window that got smashed. “The whole vehicle was just full of shattered glass, so I’m sure if someone would’ve been there they would’ve been badly hurt,” he said.

He also posted on Twitter to thank Elon Musk and Tesla for “designing such a great product.”