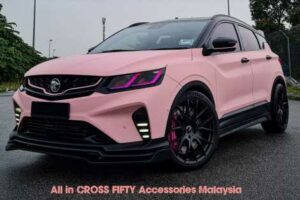 Remember Bumblebee, the famous yellow Proton X50 that went viral late last year? Well, it was unfortunately met with an accident not too long ago, but the car has been restored and transformed into the very car you see here.

Yes, it’s the same 1.5 TGDi Flagship as before. Obviously, the Bumblebee is no more, so Lee went with a new name to go with one of his favourite colours – Miltank. That’s right, the revived X50 is named after a Pokemon with tank-like defenses, and it also happens to be pink-bodied cow with black accents. Google it, and tell us if you see the similarities.

Anyway, the Ceramic Matte Pink wrap cost Lee approximately RM3,500. Like before, there are no signs of chrome, for they have all been blacked or pinked out. Familiar add-ons like the triple front lip and tri-bar LED strips continue to be featured here, but the headlights have been tinted darker and the LED daytime running lights appear to be fuchsia in colour. Would that represent Miltank’s teats, then? As we move towards the back, we see that the roof rails are still black, and the larger rear spoiler from the Geely Binyue Sport (minus the pink accents) is retained as well. At this point, your eyes would inevitably be drawn to the Proton script, except it now reads ‘Poor’. The LED bar that previously connected the tail lights has been removed, by the way.

Wheel size remains unchanged at 20 inches, but these are new twin seven-spoke units from AD Wheels. The bead seat profile is nine inches, so it’s two inches wider than factory spec (18-inch wheels, 7JJ), and half an inch wider than the Bumblebee’s Veemann set. They ride on the same Michelin Pilot Sport 4 S rubbers with a profile of 235/40.

Unchanged from before are the brakes and suspension kit. Stopping power comes from a pair of 405 mm drilled and ventilated rotors up front, which are taken from the Cadillac CTS-V, a V8-powered super sedan. The discs are clamped by six-piston pink-painted Brembo calipers, finished with the Proton script.

The rear discs are slightly smaller at 380 mm, furnished with four-pot clampers. These rotors came from a Porsche Cayenne, mind you, and to ensure even clamping pressure across the surface of the pads, the factory brake booster pump and brake linings have already been upgraded. For suspension, all four corners are lowered and fitted with Hi-Lo adjustable coilovers.

There are a few upgrades made to the cabin as well. For starters, the dashboard trim is wrapped in the same pink vinyl, and the entire top section of the dash is wrapped with genuine Italian Alcantara 9002. The suede material is also used to wrap the A-pillar covers, seat belt covers, centre arm rest, and door trims.

Other upgrades include a full carbon-fibre steering wheel that’s partially wrapped with perforated leather, a red 12 o’ clock wheel marker, a custom open-pore carbon-fibre centre tunnel trim, plus a three-way audio system by TPR. There’s also a rather fancy LED strip just below the Alcantara dash, and the lighting can be controlled on a dedicated mobile app (via Bluetooth). As usual, Lee isn’t done with the mods. But what do you think of his Miltank so far? The total cost of accessories this time is not revealed, but if you would like to follow his progress, you can do so by checking out the All In Cross Fifty Accessories Malaysia Facebook page.