VinFast to include What3words navigation tech with new EVs 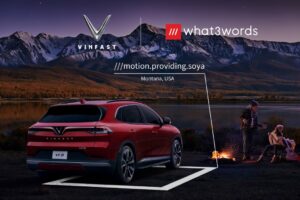 VinFast has become the first car manufacturer to partner with What3words for simplified, accurate on-board navigation, the firm claims

What3words divides the world map into a 3×3 metre grid of 57 million segments, and assigns a unique three-word code to each square, and this can be entered into the car’s navigation system. The service can operate while offline, and allows improved location accuracy over a traditional address.

The technology will be available across the entire VinFast EV line-up, and a key benefit is its multilingual capability. What3words can be operated using voice control in more than 50 different languages, which can be useful in an unfamiliar environment, according to VinFast.

For example, the user can enter an address in a foreign language into the What3words app, which will generate a three-word code in their own language to enter into the car’s navigation system or share with others in the event of an emergency.

VinFast is the first car manufacturer to offer the service, which will feature on all of its full-electric models.

VinFast CEO Le Thi Thu Thuy said: “What3words is exactly the type of partner we strive to integrate with – cutting edge, innovative and providing an answer to a very real problem.”

VinFast is set to go head to head with Tesla and VW with two new electric SUVs, called the VF e35 and VF e36, which were revealed at the LA Auto Show last year. An entry into the UK market has yet to be confirmed.