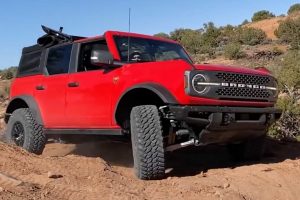 It has a host of features that make off-roading easier.

Ford Bronco deliveries won’t start for a few more months, but the comparisons between it and the Jeep Wrangler have already begun. Ford is entering a market that Jeep dominates, but the Wrangler’s reign may soon end. A new video asks whether the Bronco is better than the Wrangler, and while there’s no definitive answer, the Bronco is stacking up to be a formidable opponent to the Jeep.

The video focuses on rock crawling and the Bronco’s suite of technological tricks that help it tackle the harsh terrain. One of the first features highlighted is the sway bar disconnect, which can be activated under load. The Wrangler packs this feature, too, though it operates the best on level ground. Another neat feature the SUV packs is the Trail Turn Assist function, which locks the inside wheel during turns to help the Bronco take tight corners on the trail better.

The Bronco also shows off its Trail Control feature, a low-speed cruise control that helps during rock crawling. However, the neater feature is the Trail One-Pedal Drive. This allows the Bronco to take a bit of control from the driver to allow them to operate the vehicle using only the brake pedal. This gives drivers better control of the vehicle during hard-core rock crawling situations by setting a maximum speed and it’s but one of several of the Bronco’s tech tricks Ford designed into the SUV.

Official Bronco production has yet to start, so it’ll be a bit before a proper comparison is possible between it and the Jeep. The Bronco has faced several production delays, pushing back the start of deliveries from this spring to sometime this summer. The coronavirus pandemic has negatively affected the supplier building the Bronco’s hardtops, forcing certain customers to switch their order or wait for the 2022 model year. However, there’ll be new Broncos hitting the dusty trails soon, and we’re eager for it to meet a Wrangler in the wild.