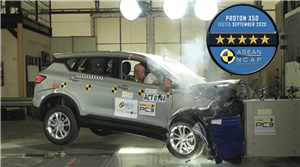 We now have the full New Car Assessment Program for Southeast Asian Countries (ASEAN NCAP) crash safety report for the Proton X50, including the full crash test video. As announced by Proton last week, its upcoming B-segment SUV scored a full five-star crash safety rating, and it is now confirmed that it stands for all four variants available, since the crash tests were carried out on the X50 Standard.

Yes, you read that right, the tests were done on base X50s equipped with four rather than six airbags, which are fitted to the other three variants. The ASEAN NCAP video shows how the X50 withstood both frontal and side impacts from multiple angles. The frontal crash, especially, looks rather promising as the A-pillars remained intact.

Looking at the full report, ASEAN NCAP gave the Proton X50 a score of 13.42 out of 16 for frontal impact, a full 16 for side impact and 2 out of 4 for head protection technology (points docked for the lack of curtain airbags on the vehicles tested). Its total for Adult Occupant Protection (AOP) is 31.42 out of a max of 36.

To put that into perspective, those numbers compare favourably against the Perodua Aruz (12.50, 14.64, 4, AOP total 31.14), even though it falls behind the recently tested (and fellow B-segment SUV) Toyota Corolla Cross (13.01, 16, 4, AOP total 33.01). It has to be mentioned, though, that if the X50 was tested with six airbags instead of four, it would have bested the Corolla Cross too.

As for Safety Assist, the X50 scored 14 out of 18, losing points for not having seatbelt reminders for rear passengers (for the Standard variant tested at least – the Flagship version we’ve tested has belt reminders for all seats). Here, both the Aruz and Corolla Cross had better outings with 16 and 14.50 respectively.

The latest version of ASEAN NCAP testing protocol also includes a separate assessment for blind-spot technology. The independent body confirmed that the X50’s blind-spot monitor functions within the test parameters (on both sides), as shown in the test video.

On a side note, the full report also mentions that the safety rating applies for Proton X50 models meant for the Thai market too. Well, now we know that the X50 will be exported there – thanks for the info, ASEAN NCAP!

So, what do you think of the Proton X50’s ASEAN NCAP crash test result? Discuss in the comments section below.