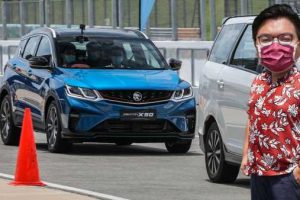 We previously talked about the Advanced Driver Assistance System (ADAS) suite in Proton X50 Flagship, which sounds promising given the number of active safety systems and their functionality. Of course, talk is cheap, so during yesterday’s second media preview event, Proton gave us a live demonstration of some of these systems for us to experience ourselves.

In this video, you get to see the X50 Flagship’s forward collision warning (FCW) and autonomous emergency braking (AEB) systems in action, with Hafriz Shah on hand to guide you on how they operate.

First up, FCW serves to warn drivers of any potential collisions up ahead, and it will do so in three stages. At the first stage, a visual warning is displayed on the instrument cluster when the system detects the car is at a potentially unsafe distance from the vehicle ahead.

Should the driver ignore this and continue to close the gap, pre-collision warning kicks into action, providing both audio and visual alerts, including a reminder to the driver to begin engaging the brakes. The final level is acute warning brake, and that is when the system actively applies the brakes abruptly to prevent or mitigate a crash, while snapping you back to attention.

Ignore all three stages and AEB takes over, automatically braking the car to a stop. This uses the car’s onboard sensors and operates at speeds between 4-150 km/h in situations involving moving vehicles (cars and motorcycles), and up to 80 km/h with stationary vehicles. It can also detect pedestrians, although this works at speeds of up to 70 km/h only.

The X50’s AEB system also includes emergency brake assist, which continues to monitor the situation even when you’ve applied the brakes, kicking into action if it detects insufficient braking force is applied. This is different from AEB in certain other cars, which disengages the system when you’re braking, as it thinks you’re in full control.

Of course, while the systems are impressive, they are by no means a reason for you to slack behind the wheel. These systems are there for backup and you shouldn’t be dependent on them always, so stay aware and be ready on those brakes yourselves.