Home » Car Reviews » VIDEO: Is the Nissan R34 GT-R worth all the money? – paultan.org

VIDEO: Is the Nissan R34 GT-R worth all the money? – paultan.org 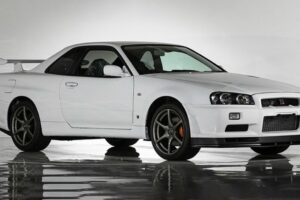 The Nissan GT-R is an undeniable automotive icon, a high-performance thoroughbred adored by many around the world. It has gone through six iterations since being introduced for the first time in 1969, each with its unique story to tell. Your favourite GT-R may differ from your peers, but it almost cannot be argued that, aside from the R35, the R34 is the most popular model of all GT-Rs. No prizes for guessing why.

In any case, the reason the R34 is being brought back into the spotlight is because of recent sales where owners claimed to have flipped them for huge profits. Remember that mint 2002 GT-R V-Spec II Nür that was sold for RM2.3 million at an auction in Japan? There’s also a Millenium Jade model going for RM2 million by Mutiara Motors, in case you’re interested.

But can the astronomically high prices of these R34s be justified in 2021, and can it really live up to the hype? The question is perhaps best left to Craig Lieberman to answer. Lieberman has owned no less than 40 cars in his lifetime, including several Porsches, Lamborghinis, Ferraris and – you guessed it – Nissans. Just for perspective, he said the R35 GT-R is by far the best car he has owned, and has been daily driving one for seven years.