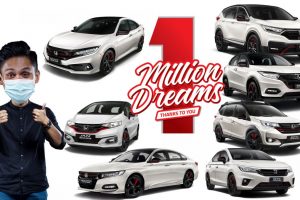 So this is it, folks! Honda Malaysia is on its way to reaching one million vehicle sales, and the company plans to celebrate by giving away a bunch of stuff through its 1 Million Dreams Campaign, including seven special edition Honda models. That’s one car for each digit that forms one million, and also they are worth RM1 million collectively.

Feels like it only recently celebrated the 900,000 sales milestone by giving away nine cars, but here we are, at the millionth mark.

Anyway, the seven cars include the Honda Jazz, the all-new City, BR-V, HR-V, Civic, CR-V facelift, and Accord. They are all based on their respective range-toppers and get the same general treatment, you know, with the two-tone Platinum White Pearl paintjob and black roof, black painted alloy wheels and some red accents inside and out.

As you can see here, the Jazz and HR-V get red accents on the lower section of their radiator grille, whereas the Civic, BR-V and Accord get a slimmer red accent along the middle of the grille. Only the City and CR-V have the red strip along the lower extremities of the front bumper.

Now, the Jazz, along with all the SUV and crossover models have their pillars blacked out. Those on the City, Civic and Accord are finished in body colour, which I think is a good call. Other red accents can be found on the black side mirror caps and alloy wheels. Interestingly, the Jazz seems to be the only variant with a red accented rear diffuser piece, but then again it’s the only model with its rear end shown.

So, what can you do to win? There are a few steps but don’t worry, the process is fairly simple. First of all, you have to participate in any of all of the six activities prepared by Honda Malaysia. Naturally, the more activities you participate in, the higher your chances of winning, so be sure to take part in all of them.

To maximise your chances of winning, you’ll have to download the HondaTouch mobile app and complete the in-app registration. Doing this step alone will multiply all the other entries by five times, so make sure to download and sign up for the app.

The other activities include playing the 1 Million Dreams Game on the Honda Malaysia website, test drive a Honda, booking a Honda, and registering a new Honda. For existing owners, even servicing or repairing your car is worth up to 15 entries.

If you don’t win the cars, don’t worry, there are other weekly prizes up for grabs as well, from brands such as Shopee, Watsons and Cuckoo. The campaign starts from February 25 and ends on March 24. So, what do you think of the cars? Let us know in the comments section, below.