‘Very frustrating!’ Anger at drivers dumping cars around homes before going on holiday 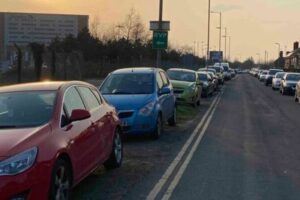 Some residents have also reported seeing holidaymakers who are heading to Liverpool John Lennon Airport urinating in private gardens and dumping rubbish, as well as from leaving cars strewn around the area.

The angry homeowners have resorted to parking across their own driveways and on central reservations to thwart the drivers.

Parts of Speke in the city have become popular drop off points for families travelling to and from Liverpool John Lennon Airport who wish to avoid the airport’s car parking charges.

Anthony Brown, 73, who has lived in the area for the last 31 years, said: “It’s very frustrating.

“They park in between ours and next door’s car and you can’t get your car out.

“It varies each day – it’s early morning and late at night.

“You get nothing and then there’s a typhoon [of cars], it seems to be happening when you’re sitting down watching something or reading.”

Mr Brown has moved his bedroom into the back room of his house due to the noise of people parking outside his house to catch flights in the early hours and late at night. He said: “It’s going to affect the house prices, they’re not high anyway in Speke.

“I go out for 20 minutes, come back and can’t park outside my house, I have to go and park down the road.

“It’s not just dropping people off, they go in [the airport] with them and they might stay there until the flight’s gone. They go and someone else comes in.”

The airport currently charges £4 for someone to park directly opposite the terminal for up to 10 minutes, with the price rising to £10 for 20 minutes and £25 for up to an hour.

Liverpool Airport said there is also a free drop-off point for up to 40 minutes, increasing to £8 for an hour.

Another resident, Michael Cox, 52, said he decided to move out of his home due to the issue.

Mr Cox said: “I said to them ‘you’re parking across my driveway’ and they said ‘I’ll only be 10 minutes.’

“You’re inundated with 60/70 cars a day. They’re sitting there for two hours sometimes,” the Mirror reported.

An Airport spokesperson said: “We share resident’s frustration over the behaviour of some drivers who choose to park on public roads close to the airport when picking up or dropping off passengers, when we have on site car parks specifically designated for this use.

“This includes a free drop-off car park for those who do not want to pay for the convenience of being close to the terminal, with parking available for up to 40 mins free of charge.”

They continued: “This is just a short walk from the terminal but a similar distance away compared to where cars parking on the local public roads are, plus our car park has a shelter for passengers waiting to be picked in poor weather.

“Unfortunately because some cars choose to park on public roads outside of the airport, we have no control on parking in these areas or on measures to deter drivers from parking here.

“We have had discussions with residents, local councillors and the City Council in the past to look at ways to tackle this problem and to deter such parking but sadly this continues to be a problem.”

Last year local councils made £45million from parking fines – more than £5,000 every hour.