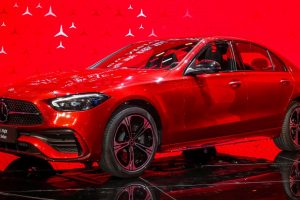 To continue catering to customers in China who have an affinity for stretched vehicles, Mercedes-Benz has unveiled the new long-wheelbase C-Class at the ongoing Auto Shanghai. Manufactured by Beijing Benz, which is a joint venture between BAIC Motor and Daimler, the model is based on the fifth-generation W206 C-Class that arrived earlier in February.

In terms of design, the C-Class L looks similar to its standard-wheelbase sibling, but there are a few key identifiers to mark it out as the stretched version. For starters, the rear doors are larger to provide entry into the more spacious cabin, and if that’s not obvious enough, you can look for the rear badge and stylised “L” on the C-pillars.

Based on the photos provided by Mercedes-Benz, the model will be offered in two styling packages, with one of them being the AMG Line with its chrome-pinned grille and A-wing-profiled bumper. Meanwhile, the other option is reminiscent of the Exclusive Line exterior that features a multi-slat grille and a bonnet that does away with the power domes and adds on the classic tri-star.

Moving inside, things are pretty much the same at the front as the global model, including the layout of the dashboard that sports a 12.3-inch digital instrument cluster and triple air vents placed above a portrait-format, 11.9-inch touchscreen infotainment system powered by the Mercedes-Benz User Experience (MBUX).

The big changes take place at the back, where passengers will not only get more legroom and fancier seats, but also comfortable pillows for the headrests. Mercedes-Benz also points out that the rear armrest is larger and offers a more spacious stowage compartment, USB ports and cupholders to “ensure additional, luxurious comfort in the rear.” Other special, market-specific features include comfort suspension and enhanced noise insulation for an even quieter interior.

Based on a report by Autohome, the C-Class L will be offered to customers in China with a 1.5 litre turbocharged four-cylinder petrol engine with or without 48-volt mild hybrid technology, along with a 2.0 litre turbo four-pot, with outputs ranging from 170 PS (168 hp) to 204 PS (201 hp). A nine-speed 9G-Tronic automatic transmission is standard and 4Matic all-wheel drive is available as an option.

The C-Class L joins the A-Class L Sedan, E-Class L and GLC L in China, and will face competition from the BMW 3 Series LWB as well as the Audi A4L. While the wheelbase of C-Class L easily exceeds the A4L (2,908 mm), it is marginally less than the 3 Series LWB (2,961 mm).